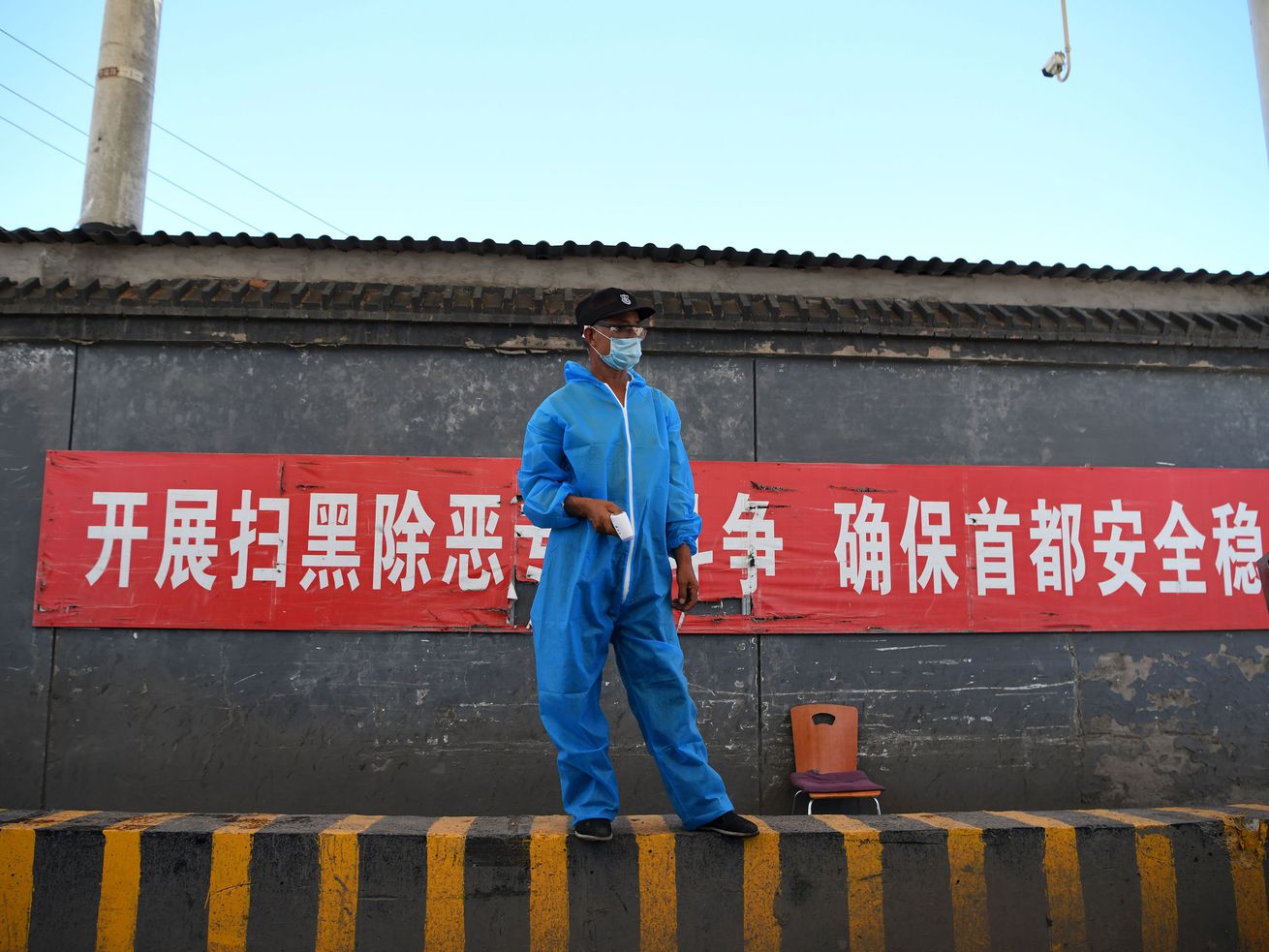 A guard stands outside the Xinfadi market in Beijing, shuttered due to concerns of Covid-19. | Noel Celis/AFP/Getty Images

A huge market in Beijing is the source of a cluster of new infections.

China reported on Sunday that the country had 57 new confirmed cases of coronavirus as of midnight on Saturday — the highest number of infections it has reported in two months.

The spike in cases — which appear to have originated in a wholesale food market in Beijing — has caused Chinese authorities to selectively lock down at-risk areas, highlighting how countries seeking a return to normalcy after reducing transmission of the virus are still at risk of new outbreaks.

For nearly two months, there had been almost no new cases of coronavirus reported in Beijing. But on Friday, one new case was reported, a number that rose dramatically on Saturday.

Contact tracing suggests that the cases originated at Xinfadi, one of the largest food markets in Asia. How the coronavirus arrived at Xinfadi is unclear; however, government officials have begun to attribute the new infections to foreign travelers.

“Our preliminary assessment is the virus came from overseas,” Yang Peng, a government epidemiologist, told state media, according to Reuters. “We still can’t determine how it got here. It might’ve been on contaminated seafood or meat, or spread from the feces of people inside the market.”

The capital quickly took measures to alert the public and control the spread of the virus with what officials have described as a “wartime” approach. “Beijing has entered an extraordinary period,” city spokesman Xu Hejian said at a conference, per Reuters.

Authorities closed Xinfadi, locked down nearly a dozen residential communities near the market, and installed a fence to block a road leading to a group of apartment buildings, according to the Associated Press. Other neighborhoods in Beijing have been deemed to be at medium risk for the spread, and at least 10 Chinese cities have told residents to not visit the capital.

But despite these precautions, the virus has already spread beyond Beijing: There are two confirmed cases in the neighboring province of Liaoning that have been traced back to contact with people infected in the city.

It’s unclear how reliable the numbers are, and how accurate the claims about the outbreak’s origin are. Experts like Isaac Stone Fish, a senior fellow at the Asia Society’s Center on US-China Relations, have raised concerns that “Chinese statistics are growing more and more untrustworthy” over the course of the global pandemic, and that the government has an interest in downplaying statistics that cast China’s management of the virus in a negative light. That being said, it is noteworthy that China has openly acknowledged a spike in cases — and spread beyond one city.

As lockdowns ease, some countries are seeing new spikes in infections

China is just one example of a phenomenon seen in countries around the world, in which eased lockdowns have been followed by new upticks in confirmed coronavirus cases.

South Korea, which began opening nonessential businesses in early May, is reporting an increase in cases linked to churches, nightclubs, warehouses, and door-to-door salesmanship.

In the US, coronavirus cases are surging across the Sunbelt and the West after states in those regions opened up businesses and relaxed social distancing protocols. According to the New York Times’s Julie Bosman and Mitch Smith, reopenings appear to be a significant factor in the acceleration of new cases: “There is ample reason to tie the latest surge of infections to relatively early reopenings. Clusters of infections in food processing facilities, jails and nursing homes continue to create hot spots in some places, but they do not explain the broader pattern.”

Unlike China and South Korea, however, the US did not — and does not — apply an aggressive top-down approach to curbing the spread of the virus. China employs sweeping lockdowns and surveillance, while South Korea uses highly sophisticated contact tracing and quarantine regimes to isolate hot spots.

The US, by contrast, has encouraged state and local governments to handle lockdowns as they wish, and developed no comparable method for rapidly identifying and isolating infected communities. This has led to concerns that outbreaks like the one in Beijing won’t necessarily be dealt with quickly by authorities in the US, and that surges in cases could exact a greater toll.

Every day at Vox, we aim to answer your most important questions and provide you, and our audience around the world, with information that has the power to save lives. Our mission has never been more vital than it is in this moment: to empower you through understanding. Vox’s work is reaching more people than ever, but our distinctive brand of explanatory journalism takes resources — particularly during a pandemic and an economic downturn. Your financial contribution will not constitute a donation, but it will enable our staff to continue to offer free articles, videos, and podcasts at the quality and volume that this moment requires. Please consider making a contribution to Vox today.